On to Capitol Reef National Park

We arrived safely in Torrey, Utah, a quaint little town with plenty of restaurants and art galleries and shops for local products. Lunch was the first order of business and we found Cafe Diablo on the outskirts of town, which was recommended by Fodor’s. This turned out to be a wonderful restaurant and we ate there three times in the next couple of days.

As we drove through Torrey, there were speed limit signs and digital signs telling us how fast we were going. They were serious about speeding! In addition, the sheriff’s car was parked in a prominent location in the middle of the busiest area, and so we paid close attention to the speedometer.

Capitol Reef National Park is a large park.  Within its borders there is an early Mormon settlement named Fruita, which has a lovely little park and gigantic aspen trees.  I can proudly say I was hugged by an aspen tree.  They also had a fenced off area where they were protecting Chinese Wisteria!!  We consider that an invasive here in Virginia, but out there, they are trying to bring back this large vine. 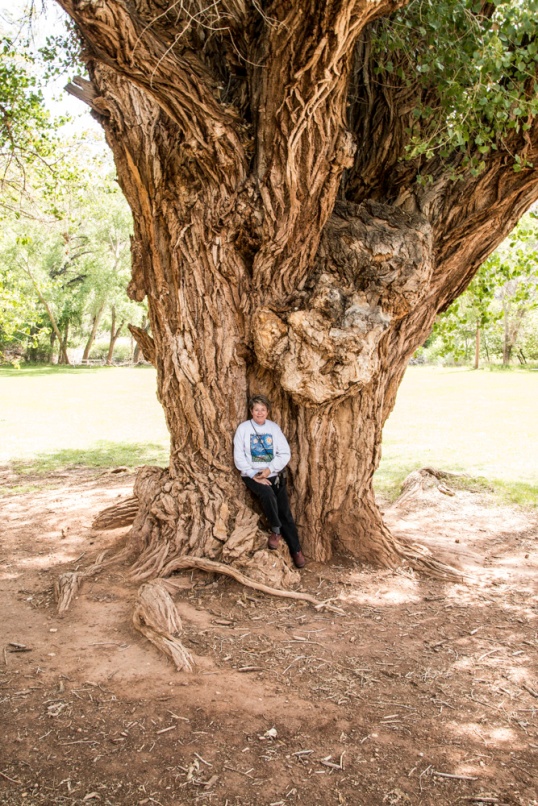 After several hours in the park, we went back into Torrey and investigated going on a Jeep Tour into an area of the park where the roads are rougher. We thought it would be great to have a guide to tell us about the landmarks there and other local information. However, that night we got a call that they had overbooked and wouldn’t be able to take us on the Jeep Tour. So, instead, the next day we drove ourselves into the Waterpocket Fold area of the park. What a great decision that was!  We would have missed that if we had gone on the Jeep Tour. This is what the Park is known for.  A giant monocline has pushed up into high cliffs, leaving a flat valley below. The monocline stretches for 100 miles. We drove through private land for a bit before hitting the park boundaries, and we saw Sandy Ranch, a huge operation below us with cows, lush green grass, and an occasional farm truck.  Then we went once again on unpaved roads, which led us back to Boulder on Route 12!!

We returned again to Torrey and again to Cafe Diablo.  This meant we had to go through the speed trap!  Every time we went through town, which was often, we saw the Sheriff’s car sitting there.  So, I decided to take a good look.  There was a dummy sitting in the driver’s seat!  So, on one trip through I made Roger pull off, I walked over to the car and took a couple of shots. You can imagine what the tourists were thinking who drove through while I was standing there with my camera! 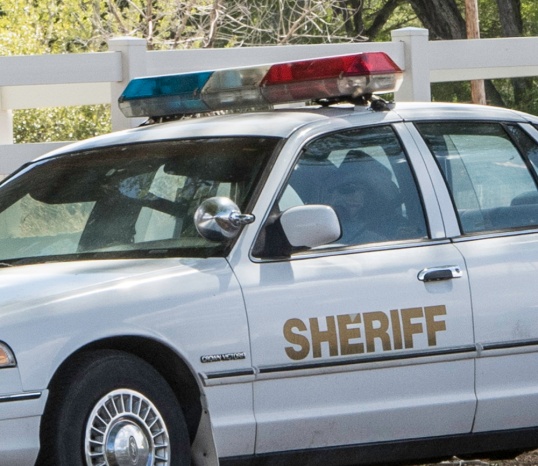