I live in a rural area and pass many photogenic scenes every time I travel anywhere. This shed is along a secondary road that is on my regular path to many of my activities. I photographed it first on March 25, 2015, after a light dusting of snow made it even more interesting than it already was. I love the trees growing out of it, the turquoise colors on the wood. 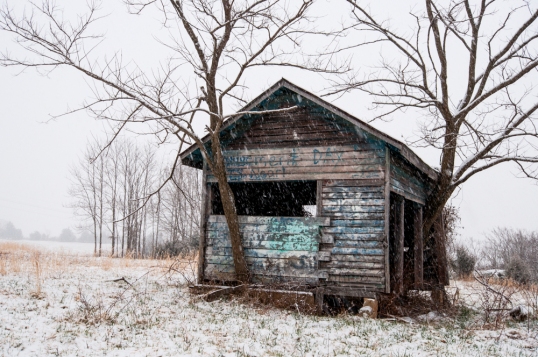 A month or so ago, I visited with my friend Joyce who lives on the farm across the road from the shed.  I asked her about it and got some wonderful history.  Her grandfather, Theodore Summerville Hoffman (1874-1963), owned the farm where she has resided off and on for much of her life, and as the owner for the last 36 years. At one time that shed was located on the farm. That parcel was sold several years ago and there is a power transfer station up the road from this shed, behind the trees.

“T.S.” Hoffman, as he was known, raised livestock on his farm.  He also bought livestock from others in the community for a purchaser who lived in Baltimore.  This little shed was the “Weigh Station” for the livestock.  When the cattle were going to be taken to market, they were weighed and measured there, then transferred to the town of Gordonsville, 20 miles away.  In the late 1930s, when my friend Joyce was a child, the cattle were driven by men on horseback to Gordonsville, and then they were put on a train to be taken to Baltimore.  She recalled that after a road was built in the late 1930’s, the livestock were loaded on trucks for transport.

Today I drove by the shed, as I have done many, many times before, and there were cows in the field.  I had to stop to get “the rest of the story.”