Archive for the tag “cheerleaders”

Three years ago, when I was just getting into serious photography, I went with a friend to the downtown mall in Charlottesville on a Friday night in September….the FIRST Friday night in September.  Little did we know that it was “Paint the Town Orange” night.  That’s what happens on the night before the first University of Virginia home football game.  The mall was full of people of all ages, and as night fell, the activity level rose.  There were people with lighted hula hoops. mothers and dads with their children in strollers, UVA students, the UVA Marching Band and the football team on stage for a giant pep rally.  As photography goes, this couldn’t have been more fun.  Because my friend and I had large DSLR cameras with zoom lenses (not THAT impressive, but what the heck), whenever we approached a new activity to shoot, the crowd would open up a passageway for us to get to the front of the action.  It was truly amazing.  That was the first time I had been aware of how much access a camera will give you in a crowd.  So, we have front row views of almost everything that happened that night.  I’ve never had more fun with a camera in my hand than I had that night, September 2009. 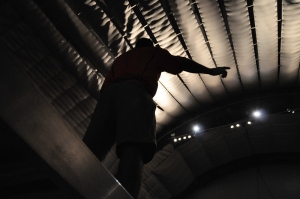 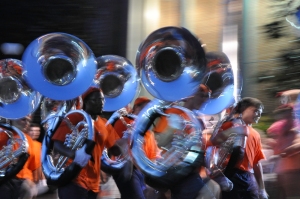 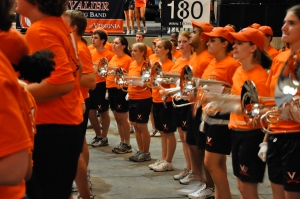 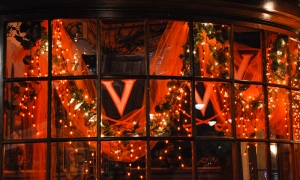