Archive for the tag “cemeteries”

On my second day in Highland I covered a lot of ground. I started the day following the fog in the Bullpasture Mountain region, up Doe Hill Road and across Jack Mountain. The fog was so amazing. The ride across Jack Mountain was on a narrow, gravel road, but there weren’t many views of the valley below because of the trees. That’s a trip for another season.

As I proceeded up Doe Hill Road, I found an old cemetery and that held my attention for quite a while. The tilted headstones, the fog in the background, even the power lines were beautiful. I entered Pendleton County, West Virginia briefly, but my quest was the fog of Virginia, so I turned around. 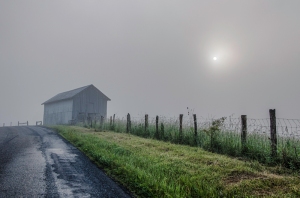 Driving up Doe Hill Road as the sun tried to make its way through the fog. 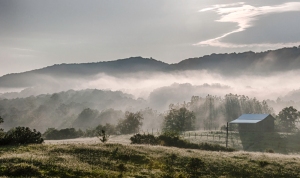 The sun’s rays through the fog provide a special mood to this photograph.

After I crossed Jack Mountain, we were on Route 220, so we headed south to Bolar Springs. My travel companion and guide was an old friend who has been living in Highland County for a year, growing veggies in a new greenhouse and learning the ways of the Highland County bureaucracy as he starts his new business. He told me that Henry Ford created a camp community around the natural springs in Bolar. A talk with locals earlier that morning had revealed to me that the springs have healing power. They are always at 73 degrees, and even thought the algae and undergrowth in the pool is not appealing, apparently it is good for what ails you. One of the locals said he got in the pool to take care of the itching and blistering of poison oak and it did indeed work. My travel companion soaked a wound on his foot that wouldn’t heal and three days later, he had scabs and the wound cleared right up! The camp is not used anymore, but the folks who live in Bolar keep it mowed and tidy. 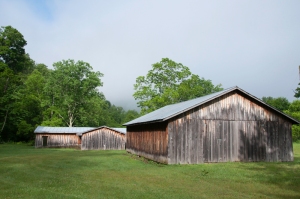 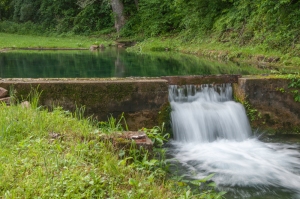 The spring comes in at the top of this image and fills a man-made pool, then overflows into a creek. There is a lot of water coming in from that spring. 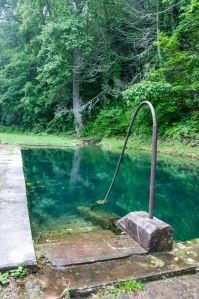 This is the entry into the natural springs pool.