The Westfjords or West Fjords is a large peninsula in northwestern Iceland. The Westfjords are very mountainous; the coastline is heavily indented by dozens of fjords surrounded by steep hills. These indentations make roads very circuitous and communications by land difficult. In addition many of the roads are closed by ice and snow for several months of the year. The cliffs at Látrabjarg comprise the longest bird cliff in the northern Atlantic Ocean and are at the westernmost point in Iceland.We arrived at our hotel, Hotel Latrabjarg, after traversing a winding, narrow gravel road into the middle of nowhere. 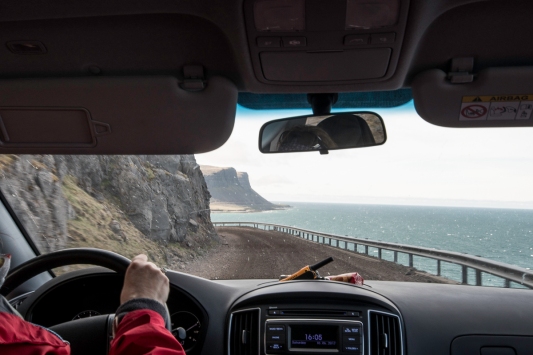 Across the water we could see a small community, but when we arrived at our hotel, we were the only ones for miles.  It was great.  The hotel was so comfortable, with large rooms, wonderful showers, a dining room that had old wooden tables and chairs and was more like the dining room of a home than a hotel.  We stayed three nights and did a variety of things while we were there.

The beach was a a short walk below the hotel and that was our first shooting location. We were photographing arctic terns, because when the sun was behind the cliffs, a black background was perfect for the white terns.  But, alas, I am not a great bird photographer, especially when they are in flight.  I found the terns to be difficult because they flew fast, darted around in every direction, and they were generally pretty far away from me.  I preferred photographing the Eurasian Oystercatcher, a larger bird whose flight was slower.  Anyway, here are a few bird photos, since that first day that was what it was all about. 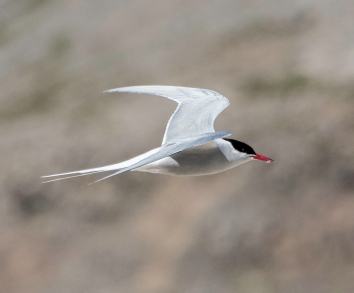 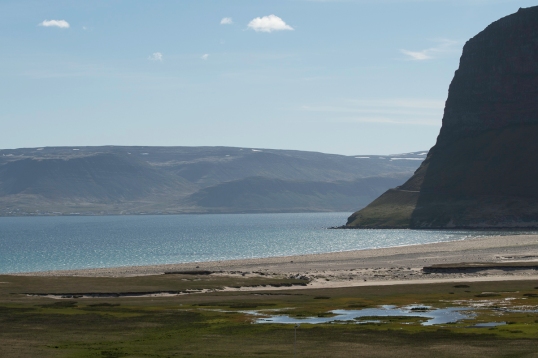 The beach near our hotel.

The second day at Hotel Latrabjarg, we drove a few miles to Raudasandsbugur, the Red Sand Beach.  What a special location this was.  As we approached the beach, there was a terrific vantage point from on high, but alas, there was no parking for the vans.  However, later, when we returned, the light had improved and we walked a bit to get higher shots.  Wow.

In between the two visits to the beach, we stopped at a church. Churches are plentiful in Iceland because property owners know that if they have a church on their land, their taxes are lower.  Churches are frequently painted black with white trim and red roofs, as this one was, and I found them to be beautiful.  I wonder what they would look like in the snow.  In winter when it is dark for 23 out of 24 hours, and there is snow on the ground, it must be amazing.  Someone told us that the snow is very white because there is no pollution, and that what little light is available is reflected on the white snow and gives the appearance of more light in the sky. I’d love to see that. 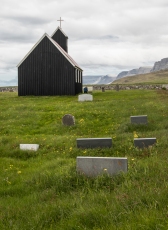 We stopped sometime along the way at an old house, built in 1907 and vacant since 1962. We photographed there, and I’ll share those another time. Across the road from that house was an old barn, a spring house, who knows?  It was built into a mound so that part of it was underground, with the side with a door above ground.  Here are some views of that interesting building.  Look at that landscape! 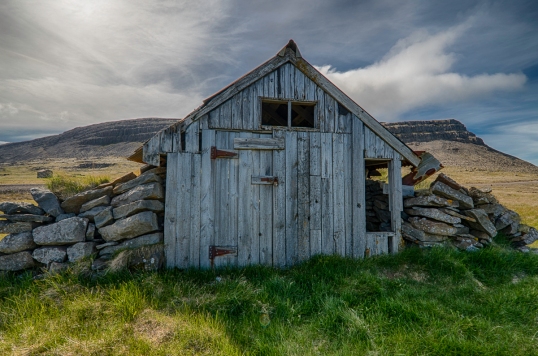