Historic Tangier Island is located in the Chesapeake Bay, accessible by tourist boat from either Reedville, Virginia on the west or Crisfield, Maryland on the east.  Our 1 hour, 40 minute trip over on the Chesapeake Breeze from Reedville was a bit rough, with rain and waves that rocked the boat to and fro.  The trip back was no different, but our three hours on the island were dry, if not a bit dreary.

Tangier Island was discovered by John Smith in 1608 when he was exploring the Bay.  The lifestyle of the island has not changed in many years.  Crabbing, fishing and tourism are the main sources of income for the 500 inhabitants, whose median age is 60 years.  The island is being swallowed up by the Bay at the rate of 30 feet per year!  Efforts to create a jetty are in discussion.

This is a small island, and it is possible to walk the entire area in a short period of time.  The main modes of transportation for the residents are motorbikes and golf cart, and the narrow streets tell the story of how they came to be used there. Occasional pickup trucks can been seen making deliveries gathered from the boats that bring in supplies.Even the U.S. Mail Boat had additional boxes and crates full of necessities. One power company truck, that had been brought over on a barge, had squeezed into a tiny space to erect new poles and change out the lines, repairing damage from recent storms. Evidence of the storms was also visible as we approached the island, where we saw many damaged crab shacks sinking into the Bay.

We had a delightful family-style lunch at Hilda Crockett’s Restaurant. Other folks who had arrived with us on the Chesapeake Breeze joined us at a table filled with platters of sliced ham, crab cakes, clam fritters, and assorted vegetables.  After lunch,  we took a tour around the island on a golf cart with a native of Tangier, who told us a bit of the history and the current status of the island. This year the school graduated five students:  2 females who are headed to college, and 3 males who are going into the tugboat industry.  Family names on the island include Parks (our guide’s married name) and Crockett.  Old cemeteries tell the geneaology of the families on the island.

This is a culture that is in decline.  The island is in jeopardy from the ravages of nature, and the lifestyle is difficult and unattractive to young people who thrive on variety.  I have to wonder what will be there in 50 years, or maybe less.

These attractive containers are liberally available on the island.

This is representative of the streets on Tangier Island.

The Methodist parsonage is in the background. 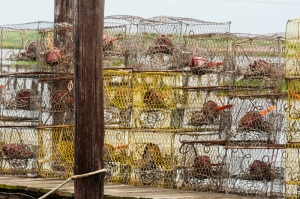 Hundreds of these pots are stacked throughout the island.

The landscape along the bay is beautiful.

This crab shack was damaged in storms and is falling into the Bay.